Formally established in 1914 Green Haworth Golf Club owes its origins to the Rileys, a local influential business family with an estate of land and property. Looking for social sporting recreation the Riley family began playing golf on the grazing moorland of Green Haworth. As the Green Haworth Golf Club was then formed, a mere thirty individuals made up this exclusive membership.  The early course comprised of a simple six holes with the members changing rooms located in a cottage on Schoolhouse Lane, some 400 yards from the first tee. 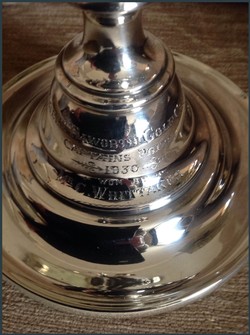 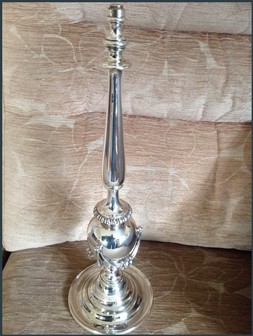 Over the following forty years the course grew to nine holes, however three of these (the first, eighth and ninth holes) were later reclaimed by the local farmer at Springvale Farm, from whom the club leased the land. and it was these that were returned to active farmland.

In 1957 the Captain Alec Denton with his Greens Committee under the direction of chairman Mr Allan Skelton, acquired fourteen acres of neighbouring land to create three new holes (6th, 7th & 8th) to replace those which where lost. During that winter the members worked on extending the remaining course. Led by grounds men Joe Morris and Alan Stuttard, volunteers from the club moved hundreds of tons of stone and soil from the site. According to local newspaper reports from the following year, many square yards of turf were transplanted to create the greens and tees, incorporating features of the existing moorland namely the deep quarries and wild shrubs and heather. Once completed the new nine hole course had longer holes than the previous incarnations and held a S.S.S. of 67.
In 1958 Green Haworth Golf Club was officially re-opened on the first Sunday afternoon of the new season, by the captain of the time Mr R. H. (Bob) Whittaker; the first competition played on the new course was a four-ball, or ‘better-ball’ event. The winners were J. Dearden, and E. M. Whittaker. 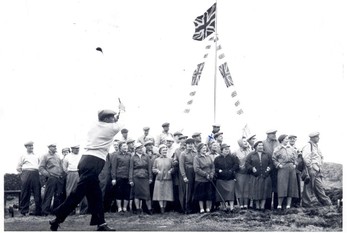 The early 90’s brought  problems to the club, the existing clubhouse needed major repair works including a new roof. The council of the day with the assistance of a local surveyor put together a blueprint for a new clubhouse. The plans were drawn up and submitted to the local council for approval.

During the following months a band of trusty members led by our then House Chairman George Wilson set about raising money for our new club house. Green Haworth members fully supported this effort, and dug deep in to their pockets and raised the sum of £12,000 towards the new club house. In 1992 the dream came true, the contract was let to a local builder and work started on the new club house.  Kevin Lynch was the club Captain at the time and he played a major part in securing a bank loan and overdraft facility with the bank. Our on site team of George Wilson, Roy Adamson, and Derek Worrall ensured that all went well with the building of our new club house.  The new club house was built over the old club house, a sight to be remembered all that remains today of the old clubhouse is the “floor” the kitchen, cellar, gent’s locker room and toilets. We now had a club house facility that members could be proud of.

1993 saw a change in legislation; and Green Haworth Golf Club was blessed with a big windfall from the vat man. This provided our club with the finance to replace our ‘old’ tractor, and provide a new green’s workshop and store to replace the wooden shed that had seen better days.

Onwards and in to the 2000’s, the members of Green Haworth continue to enjoy both the course which has developed in to an excellent test of golf, and the hospitality of the club house built in the early 90’s.

2014 is a big landmark in the history of Green Haworth Golf Club; it is 100 years young and still going strong thanks to the support of the council and members.

Who would have thought that the efforts of the Riley family all those years ago would have developed in to one of the premier 9 hole golf courses in East Lancashire. Although a nine-hole course, we have 14 tees’ to play from which does make the golf very interesting.

Please remember, visitors are always welcome at Green Haworth Golf Club, so why not come along and play our course, we are sure you will enjoy the test of golf.

We use cookies on our website to give you the most relevant experience by remembering your preferences and repeat visits. By clicking “Accept”, you consent to the use of ALL the cookies.
Cookie settingsACCEPT
Manage consent

This website uses cookies to improve your experience while you navigate through the website. Out of these, the cookies that are categorized as necessary are stored on your browser as they are essential for the working of basic functionalities of the website. We also use third-party cookies that help us analyze and understand how you use this website. These cookies will be stored in your browser only with your consent. You also have the option to opt-out of these cookies. But opting out of some of these cookies may affect your browsing experience.
Necessary Always Enabled
Necessary cookies are absolutely essential for the website to function properly. These cookies ensure basic functionalities and security features of the website, anonymously.
Functional
Functional cookies help to perform certain functionalities like sharing the content of the website on social media platforms, collect feedbacks, and other third-party features.
Performance
Performance cookies are used to understand and analyze the key performance indexes of the website which helps in delivering a better user experience for the visitors.
Analytics
Analytical cookies are used to understand how visitors interact with the website. These cookies help provide information on metrics the number of visitors, bounce rate, traffic source, etc.
Advertisement
Advertisement cookies are used to provide visitors with relevant ads and marketing campaigns. These cookies track visitors across websites and collect information to provide customized ads.
Others
Other uncategorized cookies are those that are being analyzed and have not been classified into a category as yet.
SAVE & ACCEPT