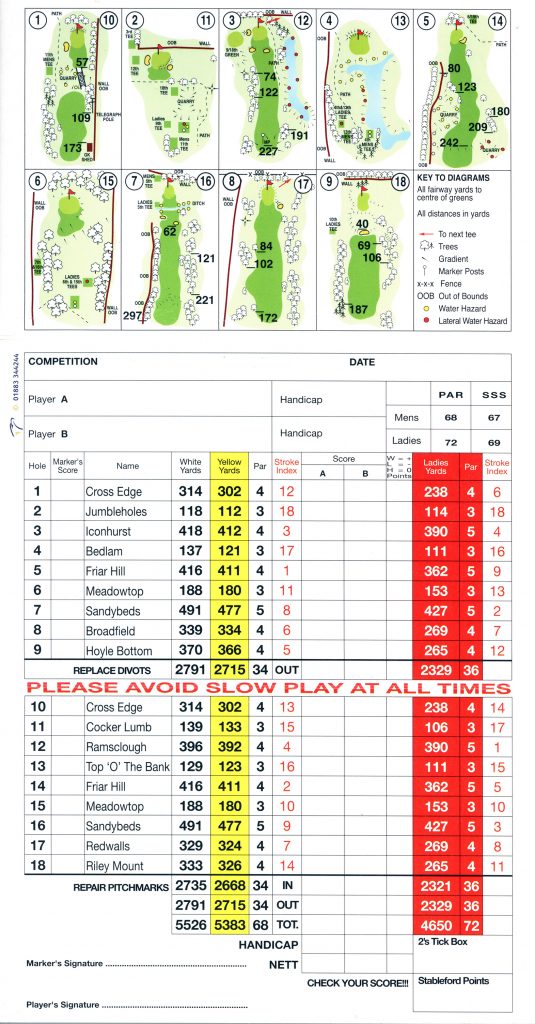 Starting to the left of the car park & short of the club house, play proceeds in a westerly direction and not infrequently via the aforementioned car park or clubhouse. A good hook will cause little trouble to those on the first tee, players on the 9th fairway however should be alert for a strangled scream followed by a small missile.

A good slice will greatly increase your knowledge of traditional dry stone walling,You are requested not to attempt recovery beyond the wall in deference to the wishes of the adjacent landowner ( a request fully endorsed by the council and the nimbler of our junior members). Just for a laugh we assume you have hit a straight ball of average length – you are now faced with a problem. Do you play up to the quarry edge or attempt to drive the quarry? Swallowing your pride you do the sensible thing.

Standing in the quarry your vision (course – wise ) is somewhat restricted, a well heathered slope, lots of sky and the knowing half smiles of the more prudent members of your party, who will stand atop the heathered slope and indicate your line to the green and tell you how far your ball has run through , the green is fairly large and if you dismiss from your mind the dent in the captains car, one hobbling cow and the “three” in the quarry you can be down in 5 or even 4 ( at least that’s what we are told)

Club selection here is vital, two prime dangers, wind conditions and head lifting. On a still day (last recorded October 1985) it’s a high iron but with wind conditions from ‘gale’ upwards we have seen most clubs played at this hole including a four wood by a senior member who effortlessly and accurately placed his ball in ‘Birdie land’ (and destroyed peoples confidence for weeks afterwards on that hole).

The better ploy is to lose the First and then see which club the other members of your party take, you can’t ask them which club they are playing but you can rifle through their bag to see which club is missing – As most golfers know, the Almighty slipped up on the eye job – one just above the nose and one in the left ear would be ideal. However a desire to ‘see’ the ball over the quarry will increase your acquaintance with the said quarry no end, and please don’t trample elephantine – like in and out of the bunkers without making good the damage, because other balls seems to like sand.

More often than not the tee shot is wind assisted and for the bigger hitters left is better than right – unless you can fluke one over the marker post, leaving one facing an obligatory accurate second shot, (bunker left, quarry right) from a downhill lie.

For mere mortals who can’t ‘kill’ a ball first let, the approach shot to the hidden green can be difficult. Use of that bit between the ears can be rewarding. If the fairway is firm a ‘run’ over the ridge can be the answer to that pitch which ends with the ball over the back of the green, mainly due to catching the reverse slope impetus on the ridge. Looking back at ones cards this hole has a high mortality rate, keep a record and find out which hole on average gives you most trouble, it may not be the one you think, a good piece of advice given by a member of long standing is to nip up before starting a round and fix in your mind where the pin is placed on the 3rd & 9th greens.

Bedlam, unkind people say this hole was designed by a sadist, but tee up a ball in a flat field and 9 times out of ten the average golfer will with consummate ease drop the ball equidistant as that from tee to green at No 4.

Much trouble can be avoided by remembering that although the tee is sheltered your ball will drift once it gets above normal ground level. Our knowledge of the insect life in and around the water at the top end of the quarry is unsurpassed. Remember that as the rough to the left of the green gets longer recovery becomes harder.

Never stand on this tee without thinking of ‘Balaclava’. “Out of bounds to the left of us, quarries to the right of us, quarries to the front of us, into the valley of high scoring charge the 200”
For the big hitters the tee shot is not to much of a problem, the perfect shot lands between or passed the top two quarries (a small enough target when you consider the distance from the tee) the difficulty for the rest of us, with the prevailing wind in your face, assuming you haven’t decapitated anyone on the 4th green or are visiting the 7th fairway earlier than anticipated is to clear the ridge with the second shot and then play a long third shot in, pin placing on the green can make the approach shot difficult, more so when it is near the right hand side behind the bunker, this is another green where a controlled run up can be useful on firmer ground.

Having negotiated three difficult holes in succession be wary that you don’t relax at the 6th and pay the penalty for loss of concentration. Few play this hole consistently well, a little courage or lack of it can make all the difference between winning or losing to par. The enclosing walls are, as one bar tiger remarked ‘paraletic to the drive’.

The view from the green, taking in a West Coast sunset and with Ingleborough, Waddington Fell and Pendle prominent is worth a pause after making sure no one is waiting to play

A relatively easy par 5 with the prevailing wind, some of our bigger hitters can reach in two, but with a head wind and the ditch running across the front of the green it can be a tough par 5.

Right of centre is the line and from there one should always aim for the sand trap on the right, secure in the knowledge that you probably won’t hit what you aim at, thus leaving you safely between the two traps, the next shot isn’t easy because after clearing the ditch the ball seems to gain pace despite the uphill slope of the green. If you can read the line putting can be fun here.

Fairway wide and long enough to accommodate a large airplane, this should be one of the easiest par’s on the course but for one great problem, the green sits flat and small, in splendid isolation and invisible until you are near enough to understand why your ball didn’t make it, once on the green putting is easy! . If you three putt this you had better get the plant pot down on the carpet at home and practice.

Even with the prevailing wind, playing from the back tee makes this hole a really difficult one

As the eighteenth, beloved for its uniqueness as a last green.

At most courses the eighteenth comes under scrutiny from the club house windows, framing dozens of unseen piggy eyes watching and waiting for that three foot missed putt. Green Haworth allows you to do this away from all but “match eyes” except on occasions such as Captains Day when multitudes can surround the green; – the facing of such an ordeal would doubtless cause some members to put their tee shot in the second quarry.

It is the approach shot to the green that has to be something special, many’s the time that one has walked up to the green thinking the shot must be good only to find that your over the back in the rough having hit the down slope at the front ( under clubbed again)

This is best played as a Humpty Odd Ball and the more the merrier, its delights can be a fitting end to every match, here all are equal, so do stop and have an odd one or more, we will all be delighted to hear the story of your long putt that dropped and remain silent about the short ones you missed – providing you will do the same for us.
We use cookies on our website to give you the most relevant experience by remembering your preferences and repeat visits. By clicking “Accept”, you consent to the use of ALL the cookies.
Cookie settingsACCEPT
Manage consent

This website uses cookies to improve your experience while you navigate through the website. Out of these, the cookies that are categorized as necessary are stored on your browser as they are essential for the working of basic functionalities of the website. We also use third-party cookies that help us analyze and understand how you use this website. These cookies will be stored in your browser only with your consent. You also have the option to opt-out of these cookies. But opting out of some of these cookies may affect your browsing experience.
Necessary Always Enabled
Necessary cookies are absolutely essential for the website to function properly. These cookies ensure basic functionalities and security features of the website, anonymously.
Functional
Functional cookies help to perform certain functionalities like sharing the content of the website on social media platforms, collect feedbacks, and other third-party features.
Performance
Performance cookies are used to understand and analyze the key performance indexes of the website which helps in delivering a better user experience for the visitors.
Analytics
Analytical cookies are used to understand how visitors interact with the website. These cookies help provide information on metrics the number of visitors, bounce rate, traffic source, etc.
Advertisement
Advertisement cookies are used to provide visitors with relevant ads and marketing campaigns. These cookies track visitors across websites and collect information to provide customized ads.
Others
Other uncategorized cookies are those that are being analyzed and have not been classified into a category as yet.
SAVE & ACCEPT